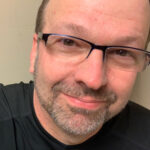 Mike Chaney came on board at TBC in April 2018 as Minister of Music. He comes to us from the college town of Bloomington, Indiana, where he met his college sweetheart, and now wife, Margie, in their collegiate musical touring group, The Singing Hoosiers. In their younger years, Mike and Margie also worked as entertainers for Opryland USA and Premier Cruise Lines. Mike was also part of a family Gospel group called The Chaney Trio, who recorded an album and did many concerts over the years.

Michael earned his Bachelor of Music degree from the University of Tennessee in Vocal Performance with a minor in Broadcasting in 1994. Michael loves vintage Christian groups such as TRUTH, Harvest, and The Imperials and has a passion for keeping our great Gospel Music from the past alive and well! Mike works full-time in the Healthcare industry but maintains a “ministry first” focus as he leads our Celebration Choir and oversees all of the other music ministries at TBC.